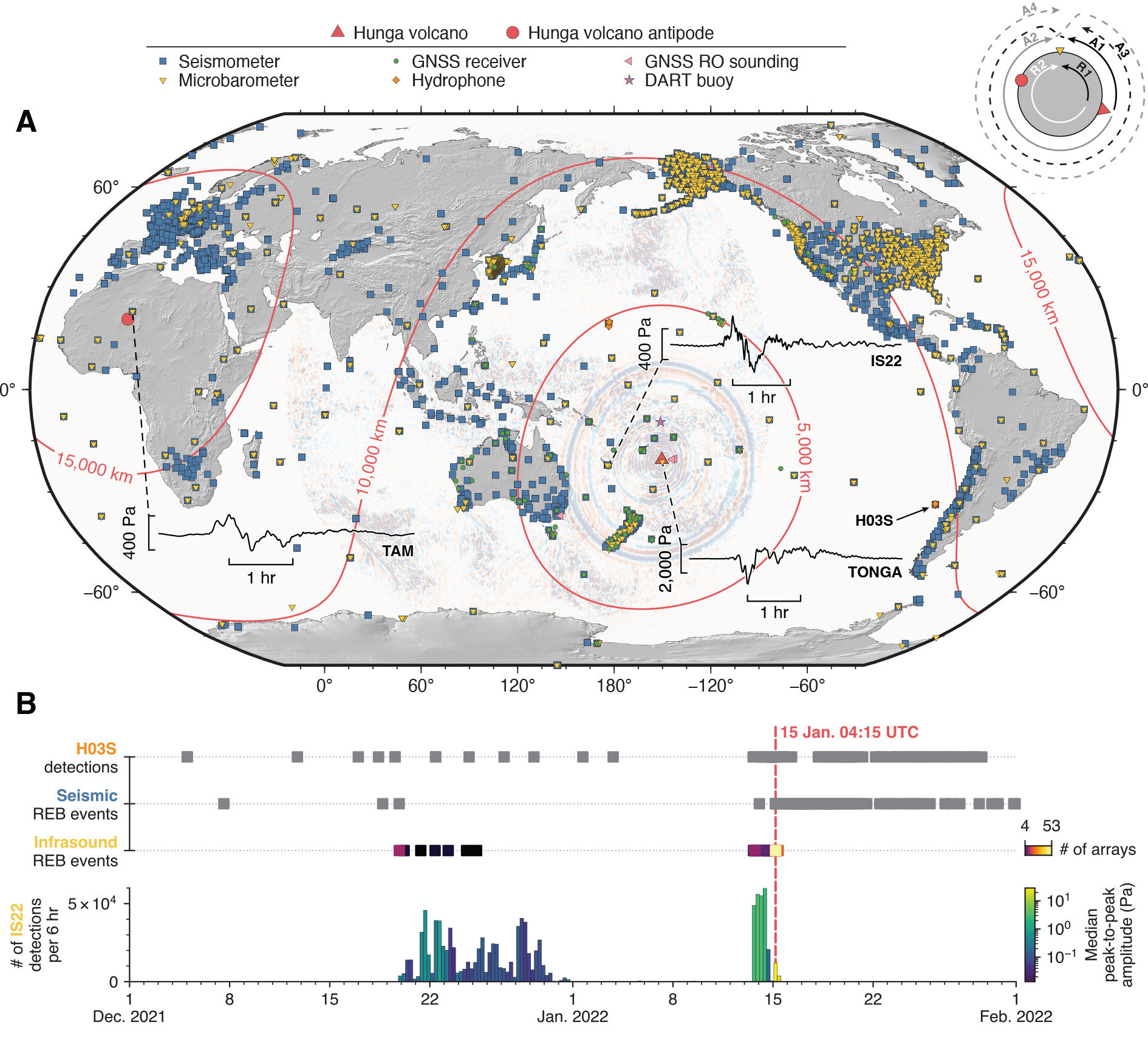 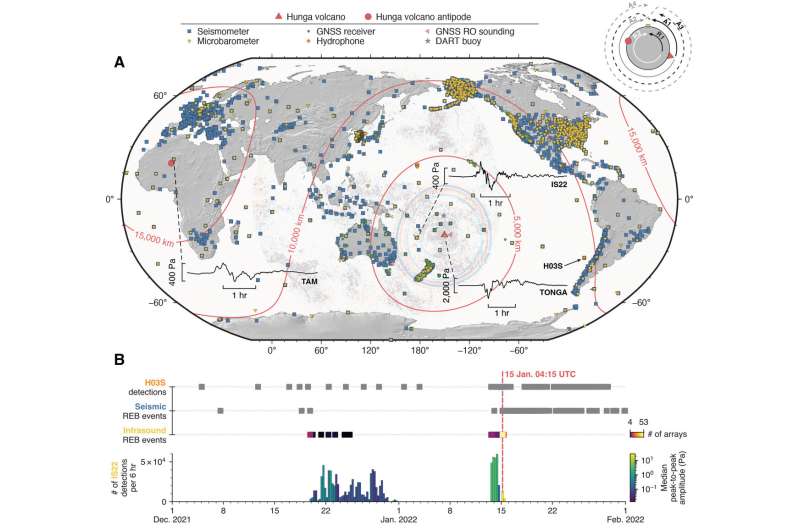 The Hunga volcano ushered in 2022 with a bang, devastating the island nation of Tonga and sending aid organizations and geoscientists into a frenzy of activity. It has been almost 140 years since an eruption of this magnitude shook the earth.

Robin Matoza of UC Santa Barbara led a team of 76 scientists from 17 nations to characterize the eruption’s atmospheric waves, the strongest recorded from a volcano since the Krakatoa eruption of 1883. The team’s work, which was put together in an unusually short time, detailed the size of the waves emanating from the eruption, which the authors found were comparable to those from Krakatoa. The data also provide exceptional resolution of the evolving wavefield compared to what was available from the historic event.

The paper published in the journal Scienceis the first comprehensive depiction of the atmospheric waves from the eruption.

Early evidence suggests that an eruption on Jan. 14 lowered the volcano’s main vent below sea level, triggering the massive explosion the following day. The Jan. 15 eruption produced a variety of different atmospheric waves, including explosions that could be heard 6,200 miles away in Alaska. It also generated an impulse that caused the unusual occurrence of a tsunami-like disturbance an hour before the actual seismic-induced tsunami began.

The Hunga volcanic eruption has provided unprecedented insight into the behavior of a variety of atmospheric wave types. “Atmospheric waves have been recorded across a wide range of frequencies worldwide,” said co-author David Fee of the University of Alaska’s Fairbanks Geophysical Institute. “And by studying this remarkable data set, we will better understand the generation, propagation and recording of acoustic and atmospheric waves.

“This has implications for monitoring nuclear explosions, volcanoes, earthquakes and a host of other phenomena,” Fee continued. “Our hope is that by understanding the atmospheric waves from that eruption, we can better monitor volcanic eruptions and tsunamis.”

Researchers were most interested in the behavior of an atmospheric wave known as the Lamb wave, which is the dominant pressure wave generated by the eruption. These are longitudinal pressure waves, similar to sound waves, but of a particularly low frequency. In fact, such a low frequency that the effects of gravity must be taken into account. Lamb waves are associated with the largest atmospheric explosions, such as large eruptions and nuclear detonations, although the wave properties differ between these two sources. They can last from minutes to several hours.

After the eruption, the waves traveled along the Earth’s surface, circling the planet four times in one direction and three times in the opposite direction, the authors reported. This was the same as what scientists observed in the Krakatoa eruption of 1883. The Lamb wave also reached the Earth’s ionosphere, rising at 700 miles per hour to an altitude of about 280 miles.

“Lamb waves are rare. We have very few high-quality observations of them,” Fee said. “By understanding the Lamb wave, we can better understand the source and eruption. It is associated with the formation of the tsunami and plume, and is also likely related to the higher frequency infrasound and sonic waves from the eruption.”

The Lamb wave consisted of at least two pulses near the volcano. The first had a 7- to 10-minute rise in pressure, followed by a second and larger compression, and then a long fall in pressure.

A key difference between the Hunga’s Lamb Wave reports and those from Krakatoa is the amount and quality of data scientists were able to collect. “We have more than a century of advances in instrument technology and global sensor density,” Matoza said. “So the 2022 Hunga event provided an unprecedented global dataset for an explosive event of this magnitude.”

Scientists noted other findings about atmospheric waves linked to the eruption, including notable long-range infrasound — sounds too low in frequency for humans to hear. Infrasound came after the Lamb wave and was followed in some regions by audible noise.

Audible noises reached Alaska, about 6,200 miles from the volcano, where they were heard as repeated booms across the state. “I heard the noise,” Fee recalls, “but definitely didn’t think it was from a volcanic eruption in the South Pacific at the time.”

The scientists believe that the sounds heard in Alaska cannot have originated in Hunga. While there is still much to learn, it is clear that standard sound models cannot explain how audible noise propagates over such extreme distances. “We interpreted that they were generated by non-linear effects somewhere along the path,” Matoza explained.

“There’s a long list of possible follow-up studies that examine the many different aspects of these signals in more detail,” he said. “As a community, we will continue to work on this event for years to come.”

Tonga Islands: A seismic algorithm shows the extent of the January 2022 eruption

Provided by the University of California – Santa Barbara