“Moles in the Dark”: Surviving and Escape from the Mariupol Steel Plant 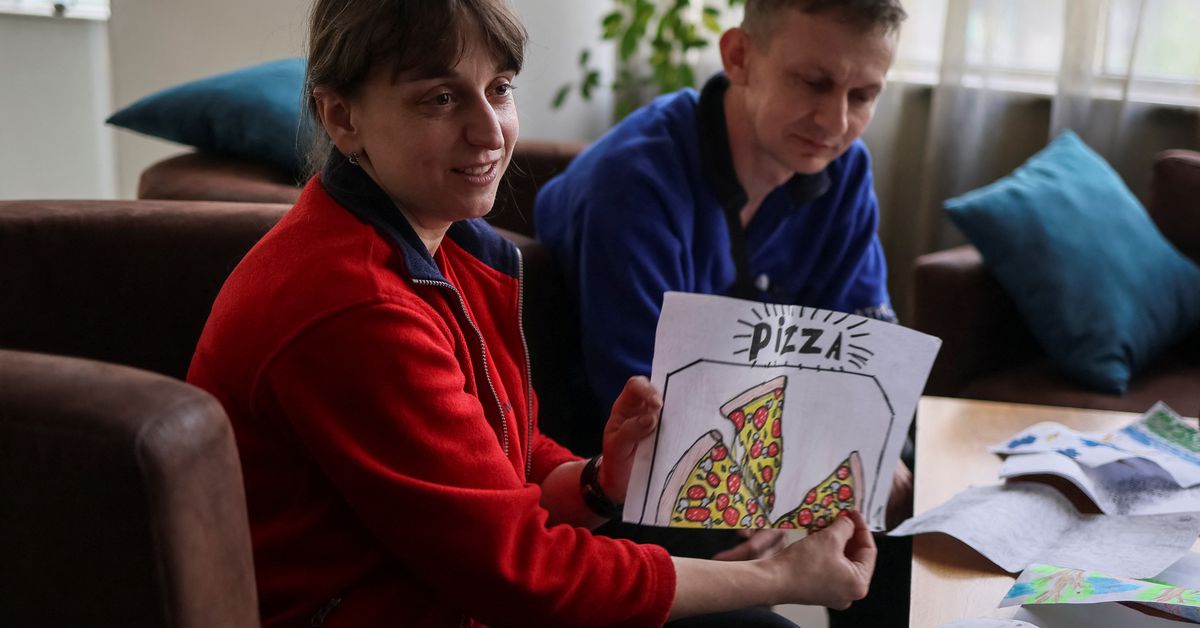 ZAPORIZHZHIA, Ukraine, May 13 (Reuters) – Five floors below the besieged Azovstal Steelworks, Ukrainian soldiers told Nataliya Babeush she had a few minutes to prepare to escape from the underground bunker she had been hiding for more than two months called her home.

The 35-year-old snapped up little more than a handful of children’s drawings: some sketches of flowers and food that had helped cheer up dozens of civilians who had been hiding in a corner of the huge, dimly lit concrete enclosure for weeks.

“I will keep them as long as possible,” she told Reuters after a humanitarian convoy took her to the southeastern Ukraine city of Zaporizhia on Sunday.

Babeush and hundreds of others had taken refuge in the vast complex beneath the Azovstal plant shortly after Russia’s invasion of Ukraine in the early hours of February 24 and the siege of the port city of Mariupol.

She saw the facility as a short-term shelter before retreating to another location. Instead, the refuge became a trap as Azovstal became the focus of the war’s fiercest fighting.

Reuters spoke to four evacuees from the plant who spent weeks being bombed in dark, damp conditions in one of the steel mill’s numerous bunkers. They described how the group of strangers were united by a need to survive, ration food and keep their spirits up as Russian forces closed in.

“Every second was hell. It’s very scary underground – being underground like moles in the dark,” said nurse Valentyna Demyanchuk, 51.

Russia has strongly denied targeting civilians in the conflict, which it describes as a “military special operation” to demilitarize Ukraine. Authorities in Kyiv say thousands of civilians have been killed in Mariupol and have accused Moscow of war crimes.

The Russian Defense Ministry and the Ukrainian government did not respond to a request for comment on the women’s statements.

All four women described being awakened before dawn on the first day of the war by the bombing of Mariupol.

Accountant Larisa Solop, 49, fled the fighting from her apartment in the east of the city. She was hoping to meet her daughter’s family across town, but there was no cell phone service.

“Many buildings were burning … and shells were whistling overhead,” she said. As the evening curfew approached, she realized her only hope was to seek shelter in the nearby Azovs valley – “just a stopover”.

Two months later, she was one of the last civilians to be evacuated from the facility by the United Nations and the International Committee of the Red Cross (ICRC) on May 6. Continue reading

Most of the 40 or so people sharing Solop’s accommodation arrived in early March. Many had only their clothes on their backs, others brought a few belongings and a bag or two of canned goods, pasta, porridge or potatoes, the women said.

Babeush, a former factory worker, became the head cook, stirring pots of soup on a wood-burning stove on the concrete floor above their bunker.

“The kids called her Aunty Soup,” Demyanchuk said, laughing ruefully. The group ate one meal a day, she said.

A strike in early March knocked out all power supplies, plunging the group into darkness. They began rationing candles, while some of the men made small torches from rows of industrial lights that could run on single batteries.

As the bombing intensified, some people tried to leave but could not reach the perimeter of the complex before returning to the shelter, the women said.

Nataliya and Volodymyr Babeush, who were evacuated from the Azovstal plant in Mariupol, show children’s drawings during an interview with Reuters, amid the Russian invasion of Ukraine, in Zaporizhia, Ukraine May 9, 2022. REUTERS/Gleb Garanich

“Planes from the sea bombed so much that we couldn’t even get outside,” Solop said, recalling her elderly father being knocked off his feet in the bunker by the force of an explosion.

As a distraction, Babeush encouraged the eight children in the group to decorate the workers’ helmets. She made a robot costume out of a box with eye holes cut out and organized a painting competition for Orthodox Easter. Everyone voted and the first prize was a can of meat pie.

Her favorite drawing was a pizza with intricately detailed strands of melted cheese.

But privately, Babeush had given up hope. She wrote her parents’ phone numbers on her jacket in case she died in the bunker. “I didn’t think we’d get out.”

Demyanchuk, her husband, son and elderly mother were among the first to refrain from doing so. Tired of the shelling, they decided to try their luck on foot on March 26, although their mother needed two canes and had to be carried part of the way.

“Food was running out and we were tired of sitting underground,” Demyanchuk said by phone from central Ukraine in early May.

Demyanchuk said the soldiers made them wait until the sky cleared and urged them to move as quickly as possible. They didn’t try to stop her.

Their journey to the territory controlled by Ukraine lasted several days. As bombers flew overhead, they walked past buildings with fresh graves dug in the yard and saw the charred body of a soldier by the sea, she said.

But once outside the bunker, she said she felt “an indescribable sense of freedom.”

The other three women had to wait more than a month before hearing about international efforts to evacuate civilians from the factory over their single crackling radio.

“It gave us a bit of strength that we would be able to get out of there soon, in just a little bit more time,” said 25-year-old Tetyana Trotsak, whose asthmatic mother suffered from the humid air.

After a local ceasefire was brokered, evacuation began in early May. But it was a bittersweet moment for those in the bunker – the group was only allowed to go in stages.

“The hardest part was waiting and hoping that we’d get out. It was a kind of desperation,” Solop said.

Food was dangerously low, even with extra rations being shared by Ukrainian forces holed up in another part of the factory that had become their last redoubt after Russian troops took control of Mariupol.

Eleven people, including families with children and people with medical conditions, went first, climbing out of the bunker and snaking through rubble to get to a convoy of buses.

“We were so happy for them, but we stayed there and thought, what if they took this group and can’t take it anymore?” Solop said.

A few days later, the soldiers told Babeush and others they had five minutes to get ready. They were told to hurry to get to the buses or the last group in the bunker would miss the chance to evacuate that day.

Babeush grabbed little more than some of the drawings that had been pasted around the shelter. “The war taught me that you don’t need material things. You don’t need anything in life – just people you can count on,” she said.