Supermassive black hole: First image of Sagittarius A* revealed at the center of the Milky Way 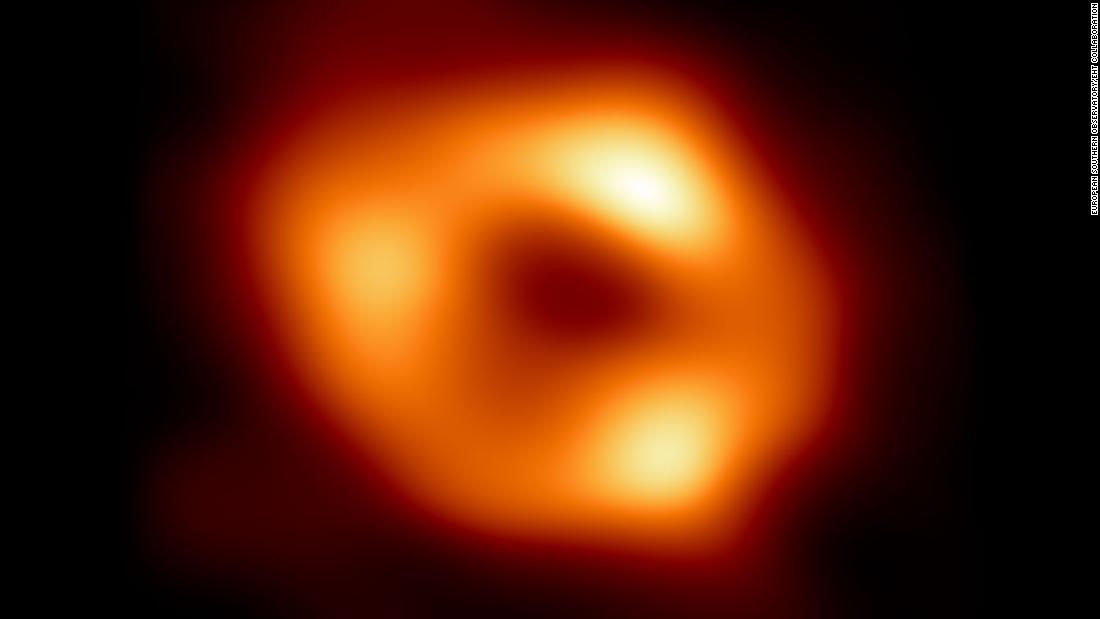 It’s the first direct observation to confirm the presence of the black hole known as Sagittarius A* as the beating heart of the Milky Way.

“For decades, astronomers have wondered what lies at the heart of our galaxy, pulling stars into tight orbits with its immense gravity,” says Michael Johnson, an astrophysicist at the Center for Astrophysics | Harvard & Smithsonian, said in a statement.

“With the (Event Horizon Telescope, or EHT) image, we’ve zoomed a thousand times closer to these orbits, where gravity is a million times stronger. In this vicinity, the black hole accelerates matter to near the speed of light, bending the paths of photons in warped (space-time).”

The black hole is about 27,000 light-years from Earth. Our solar system is located in one of the spiral arms of the Milky Way, which is why we are so far from the galactic center. If we could see this in our night sky, the black hole would appear as big as a donut on the moon.

“We were amazed at how well the ring’s size agreed with predictions from Einstein’s general theory of relativity,” EHT project scientist Geoffrey Bower, from the Institute of Astronomy and Astrophysics at Academia Sinica, Taipei, said in a statement.

“These unprecedented observations have greatly improved our understanding of what exactly is happening (at the center) of our galaxy and offer new insights into how these giant black holes interact with their surroundings.”

The results of this landmark discovery were published in a special issue of the Astrophysical Journal Letters on Thursday.

In search of the black hole

It took astronomers five years to capture and confirm this image and discovery. Previously, scientists observed stars orbiting an invisible, massive object at the galactic center.

The 2020 Nobel Prize in Physics was awarded to scientists Roger Penrose, Reinhard Genzel and Andrea Ghez for their discoveries about black holes, including evidence shared by Ghez and Genzel about the mass of the object at the center of the Milky Way.

“We now see that the black hole is swallowing up the gas and light nearby, pulling them into a bottomless pit,” says Ramesh Narayan, theoretical astrophysicist at the Center for Astrophysics | Harvard & Smithsonian, said in a statement. “This image validates decades of theoretical work to understand how black holes eat.”

The discovery was made possible by more than 300 researchers from 80 institutions working with a network of eight different radio telescopes around the world that make up the Event Horizon Telescope.

The telescope is named for the “event horizon,” the point at which no light can escape from a black hole. This global telescope network essentially forms a single “Earth-sized” virtual telescope when all eight are connected and observing together.

It is the second image ever taken of a black hole, the first being the EHT’s achievement in 2019 to image M87* at the heart of the distant galaxy Messier 87, 55 million light-years away.

While the two images look similar, Sagittarius A* is more than 1,000 times smaller than M87*.

“We have two completely different types of galaxies and two very different masses of black holes, but near the rims of these black holes they look amazingly similar,” said Sera Markoff, co-chair of the EHT Science Council and professor of theoretical astrophysics at EHT University Amsterdam, in a statement.

“This tells us that (Einstein’s theory of) general relativity governs these objects up close, and any differences we see farther away must be due to differences in the material surrounding the black holes.”

Although the Milky Way’s black hole is closer to Earth, it has been much more difficult to image.

“The gas near the black holes moves at the same speed – almost as fast as light – around both Sgr A* and M87*,” said EHT scientist Chi-kwan Chan of the Steward Observatory and Department of Astronomy the University of Arizona Data Science Institute said in a statement.

“But where gas takes days to weeks to orbit the larger M87*, it completes an orbit in just minutes in the much smaller Sgr A*. That means the brightness and pattern of the gas around Sgr A* changed rapidly during the EHT collaboration observed it — a bit like trying to get a clear picture of a puppy quickly chasing its tail.

The global network of astronomers had to develop new tools to enable the rapid movement of gas around Sagittarius A*. The resulting image is an average of several images taken by the team. According to researchers at the California Institute of Technology, capturing the Sagittarius A* image was like photographing a grain of salt in New York City with a camera in Los Angeles.

“This Event Horizon Telescope image required more than just capturing a picture of telescopes on high mountaintops. It is the product of both technically sophisticated telescope observations and innovative computational algorithms,” Katherine Bouman, Rosenberg Fellow and assistant professor of computer and mathematical sciences, electrical engineering, and astronomy at Caltech, said during a news conference.

Bouman also worked on capturing the M87* image shared in 2019. Despite the fact that the Sagittarius A* image may appear blurry, “it’s one of the sharpest images ever taken,” Bouman said.

Every telescope has been pushed to its limit, called the diffraction limit, or the maximum fine features it can see.

“And that’s basically the level we’re seeing here,” Johnson said at the news conference. “It’s fuzzy because to get a sharper image we have to move our telescopes further apart or go to higher frequencies.”

Having images of two very different black holes will allow astronomers to determine their similarities and differences and better understand how gas behaves around supermassive black holes, which could contribute to the formation and evolution of galaxies. Black holes are believed to exist at the center of most galaxies and behave like an engine that drives them.

In the meantime, the EHT team is working to expand the telescope network and make upgrades that could result in even more stunning images and even movies of black holes in the future.

Recording a moving black hole can show how it changes over time and what the gas is doing as it swirls around a black hole. Bouman and EHT member Antonio Fuentes, who will join Caltech as a postdoc in October, are developing methods that will allow them to stitch together images of the black hole to reflect this movement.

This “first direct image of the gentle giant at the center of our galaxy” is just the beginning, said Feryal Özel, a member of the EHT Science Council and professor of astronomy and physics and associate dean for research at the University of Arizona, during the press conference.

“This image is a testament to what we can achieve when, as a global research community, we bring our brightest minds together to make the seemingly impossible possible,” Sethuraman Panchanathan, director of the National Science Foundation, said in a statement. “Language, continents and even the galaxy cannot stand in the way of what humanity can achieve if we unite for the good of all.”

Tags:Supermassive black hole: First image of Sagittarius A* revealed at the center of the Milky Way - CNNWorld