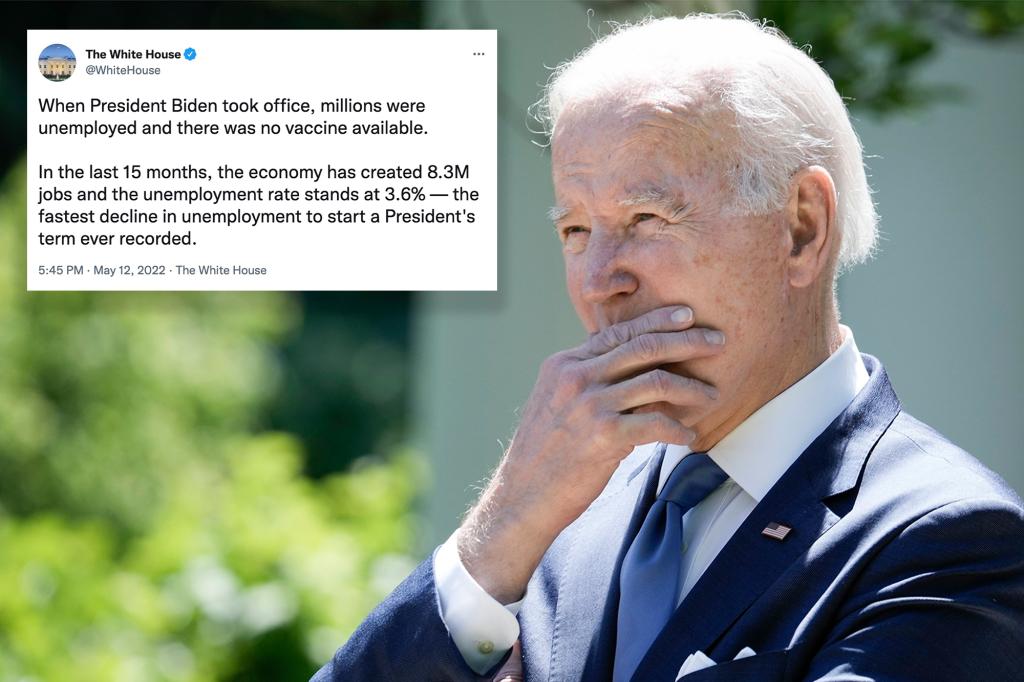 “When President Biden took office, millions were unemployed and there was no vaccine available,” he said verified account tweeted to his 7 million followers Thursday.

“Over the past 15 months, the economy has been 8.3 [million] Jobs and the unemployment rate is at 3.6% – the fastest drop in early-president unemployment on record,” the tweet concluded.

However, eagle-eyed critics were quick to point out that Biden, 79, did indeed receive his first dose of the vaccine in December 2020 — a month before he moved into 1600 Pennsylvania Avenue.

A Twitter user even shared a photo of a masked Biden getting the stab.

“Today I received the COVID-19 vaccine,” the president read original tweet from 12/21/2020. “To the scientists and researchers who have worked tirelessly to make this possible – thank you. We owe you a great deal. And to the American people – know that there is nothing to fear. When the vaccine is available, I urge you to take it.”

Weeks later, on January 13, 2021, the official White House account shared a 33-second video of then President-elect Biden got his second dose of the vaccine “because he trusts scientists”.

“Our government is committed to doing everything possible to ensure that every American has all the information they need to get vaccinated,” the Post concluded.

Another tweet noted that the White House’s claim just didn’t add up.

“No vaccine available? What was injected into President-elect Biden? Sugar water?” was the pointed answer. “And [it] was his *second* shot! Maybe check your own tweets?”

Another commenter, meanwhile, accused the Biden administration of rewriting history.

“Great point, Coach.” they tweeted sarcastically. “When America’s first President, Ben Franklin, discovered penicillin, it was one of the greatest medical advances in human history. The fact that he did this while winning the Revolutionary War and inventing electricity makes it all the more remarkable.”

“Who runs the @WhiteHouse Twitter account? Delete this fake tweet” pleaded Glenn Kessler, Editor-in-Chief of the Washington Post’s “Fact Checker” column. “Biden himself has said that 8% of seniors had received the vaccine the day he took office. Biden was one of them.”

According to Our World in Data, as of January 19, 2021, the day before Biden was inaugurated as the 46th president, more than 3 million Americans were considered fully vaccinated. As of Friday, 257.7 million Americans have received at least one dose, according to the Centers for Disease Control and Prevention.

Twitter’s COVID-19 misinformation policy bans users Giving “false or misleading” details about the virus that has killed more than 6.2 million people worldwide, according to data from Johns Hopkins University.