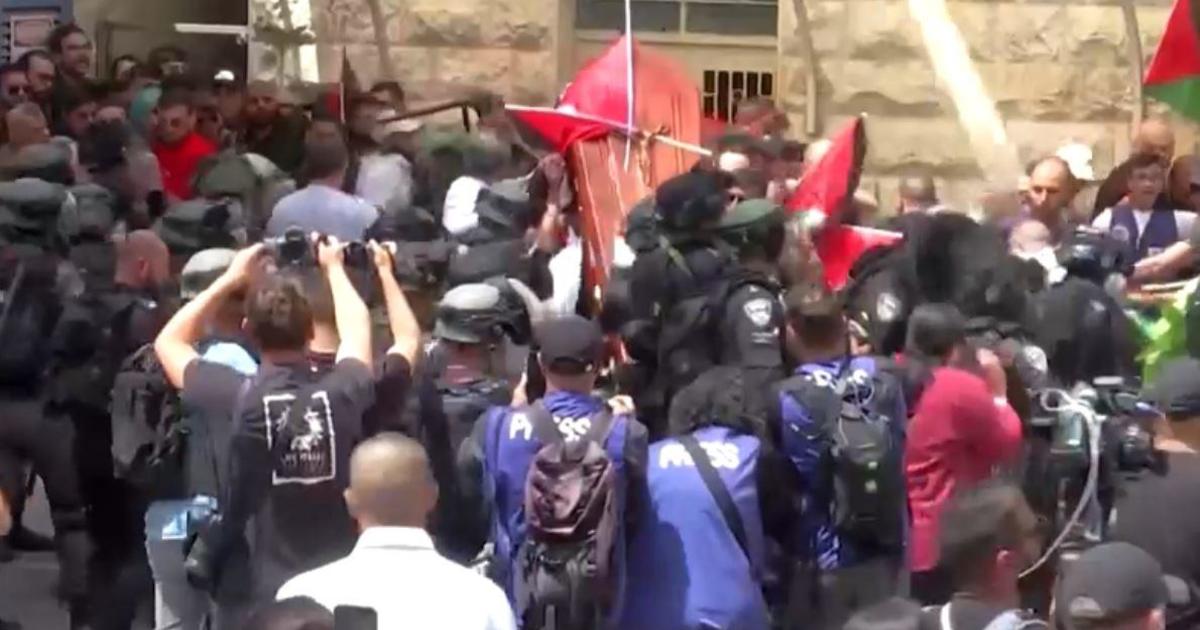 In the heart of the Middle East, there were disturbing scenes on Friday as thousands of Palestinians flocked to Jerusalem to pay their respects Al Jazeera journalist Shireen Abu Akleh, who was killed two days earlier while covering an army attack in the Israeli-occupied West Bank. Al Jazeera said Israel warned Abu Akleh’s brother to limit the size of the funeral procession, telling him that no Palestinian flags could be displayed and no slogans could be chanted. The network said it dismissed the caution, which would have been difficult to heed given the sadness and anger at the reporter’s killing.

Video clips aired on Al Jazeera – which have accused Israeli troops of deliberately opening fire on Abu Akleh – showed Israeli riot police pushing and shoving mourners outside a Jerusalem hospital and firing tear gas as people tried to remove their coffin from the hospital on Friday Carry hospital morgue.

At one point her coffin almost seemed to fall to the ground in the midst of the melee. Bullets flew through the air as Palestinians chanted anti-Israel slogans.

Israel had tightened security in Jerusalem ahead of the funeral, as Palestinian officials continued to support Al Jazeera’s claim that Abu Akleh was assassinated by Israeli forces. The Palestinian Authority has refused to cooperate with Israel in the investigation into her death, despite requests from both Israel and the US to do so.

The 51-year-old Palestinian-American journalist was killed by an apparent headshot while covering clashes in the sprawling Jenin refugee camp in the West Bank, despite wearing riot gear that clearly identified her as a member of the press.

While Israel’s leader initially claimed it was “probable” she was hit by fire from Palestinian gunmen, who fired uncontrollably, the country’s military chief said accepted the following day that it could have been shot by an Israeli soldier.

“We are not sure how she was killed, but we want to get to the bottom of this incident and uncover the truth as much as possible,” Gantz said Wednesday.

Abu Akleh’s body was transported from the West Bank to Jerusalem on Friday for burial. The funeral procession began at the hospital in East Jerusalem, with final respects at a church in the Old City before her body was buried next to her parents in a nearby cemetery.

But the violence began as soon as Abu Akleh’s coffin was carried out the hospital gates, where Israeli security forces had gathered. Video showed them rushing towards the funeral procession before grabbing and beating up some of the mourners.

Eventually the chaos subsided and the procession moved on to the church. Her coffin was carried to the cemetery, followed by a large crowd, and there were no signs of further trouble along the way.

The Israeli military said on Friday that an initial investigation showed that there was a violent exchange of fire between security forces and Palestinians about 200 meters from where Abu Akleh was killed on Wednesday, but could not determine which side fired the fatal shot.

In a statement, the military reiterated the Israeli government’s claim that Palestinian gunmen fired recklessly, including at an Israeli military vehicle near where the journalist was struck.

The military said without a ballistics analysis of the round that killed Abu Akleh it could not determine who shot the journalist. The Palestinian authorities have not allowed Israeli officials access to the bullet that killed the Al Jazeera reporter.

Tucker Reals is the foreign editor of CBSNews.com, based in CBS News’ London office.