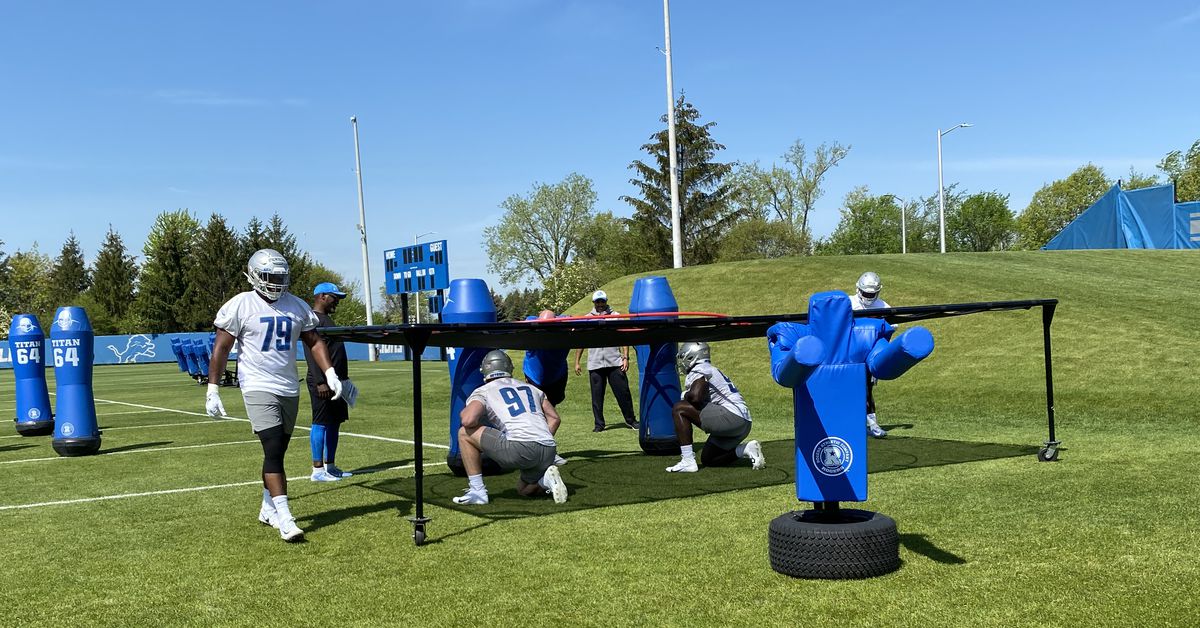 The Detroit Lions’ rookie minicamp opened Friday, but on Saturday the team made room for the media to watch a 90-minute padless training session. While most drills consisted of players working with their positional coaches, there were a few team drills that provided a deeper look into their game.

Here’s our breakdown of what happened during Saturday morning’s practice session.

As expected, Lions’ first-round pick Jameson Williams and six-round pick James Mitchell did not participate as the two continue to work back from their respective ACL tears. Mitchell is certainly closer to making a comeback but has been unable to offer any insight as to when he might be back on the field. Mitchell believes he will be back in time for training camp.

“As far as I know, I don’t have a direct appointment with you yet,” Mitchell said. “You’re just feeling me out and making a plan.”

While Williams wasn’t practicing, he was certainly in the mix a lot. He actively cheered on his teammates, taking part in the action and even catching passes from head coach Dan Campbell for a few minutes. Remarkably, he walked around with a football in hand and a sheet with the offense script on it the whole time while going through mental reps.

Additionally, UDFA tight end Derrick Deese Jr. was also sidelined for the day. No word yet on why.

When we went into minicamp there were a few questions about where some drafted freshmen would play in this defensive scheme, and while we shouldn’t jump to conclusions in May, I think we may have gotten some answers.

Sixth-round pick James Houston, who played linebacker his entire life until he joined EDGE at Jackson State last year and had a career season, is clearly viewed by the Lions as a linebacker and not an edge defender at this point. While he did get quite a few reps near the line of scrimmage, he was basically off the ball all day and practicing with the linebacker squad during positional drills. More about him in a moment.

Seventh-rounder Chase Lucas played almost exclusively as a nickel corner during practice. He’d adapted to playing indoors for the past two seasons at Arizona State and seems comfortable there.

“I was mostly at the slot (mini camp),” Lucas said after practice. “I think (DBs coach Aubrey Pleasant) and (defensive coordinator Aaron Glenn) just kind of let me know all the positions, all defense so I can communicate with the linebackers and DBs and all that. I feel like I’m in the right place with the right defense.”

Second-round pick Josh Paschal played on the edge against Aidan Hutchinson, which leads us to our first focus position…

Hutchinson’s bend and engine just pop out of the side completely. During an agility drill, Hutchinson came down extremely low around the tackle dummies and showed some nice turn speed.

Paschal’s game is very different. He doesn’t have the flex to skirt the edge and will instead win with his size and inner explosiveness. He gave a little glimpse of what his post-training role will be.

“I think I fit as that guy, big guy, big defensive end. That’s what we call it,” said Paschal. “I feel like I can play on that front, but especially on the sidelines, or even if I have to step inside for the running game.”

It will be hard to sideline Paschal as a pass-rushing threat, but it’s worth noting that he and Hutchinson switched sides regularly during the opening 11-a-side drills.

Overall, this was a difficult session to judge during training as they almost exclusively completed individual exercises.

I spent most of practice watching the linebackers, both because they were conducting drills right in front of the media and because Detroit have two draft picks at the position in Malcolm Rodriguez and Houston.

They spent much of the first half of the training working through coverage looks. Linebacker coach Kelvin Sheppard would present an offensive front, and the linebackers would need to be consistent with their pre-snap alignment and later coverage responsibilities. Sheppard spent almost no time with Rodriguez, who seemed to answer all of his questions correctly and quickly gained Sheppard’s trust.

On the other hand, Sheppard was in Houston’s ear throughout the exercise. Obviously, Houston has three years of experience as a linebacker from his time at the University of Florida, but it may take time to adjust.

In fact, the coaching seemed to pay off almost immediately. They switched to seven-a-side drills shortly after, and quarterback Connor Sampson had to pocket and run the first rep because the coverage was so good. The entire linebacking corps – and the coaching staff – erupted in cheers. Later in practice, Houston ducked for cover, slipped, but recovered in time to get into position and get both hands on the ball before the interception slipped through his hands.

“I kind of get my feet back into seven-a-side things,” Houston said after practice. “I haven’t done that in about a year. Everything comes back in a very natural way.”

Let’s start with the only quarterback in the group: Connor Sampson, a western Illinois tryout player who grew up in Belleville, Michigan. Sampson displayed a very strong arm and tight spiral during training. Accuracy was hit and miss, but it’s hard to blame a quarterback playing with an all-new set of receivers. I had no expectations when I came to Sampson and I left intrigued.

Curiously, Bell, the only running back in attendance, appeared to be one of the Lions’ priority rookie free-agent signings He was reportedly guaranteed $100,000 in his contract. He stripped James Houston completely during a special team practice where he and a defender basically ran at each other and Bell had to try to get past them. Then, a few reps later, he did the exact same thing with Rodriguez. Not great news for the Lions’ rookie-linebacker tandem, but definitely a mind-blowing moment for Bell, who has an uphill battle to make the roster in a crowded running back room.

Pimpleton is immediately noticeable for his size – or lack thereof. At just 5ft 8 and 172 pounds, he hardly looks like a football player, but when he actually moves and plays, he’s a problem. His speed was on display, as was his ability to stop to a dime at the top of his routes:

Pimpleton ended practice with a cross route that put him a few yards clear and a 25-yard shot from Sampson.