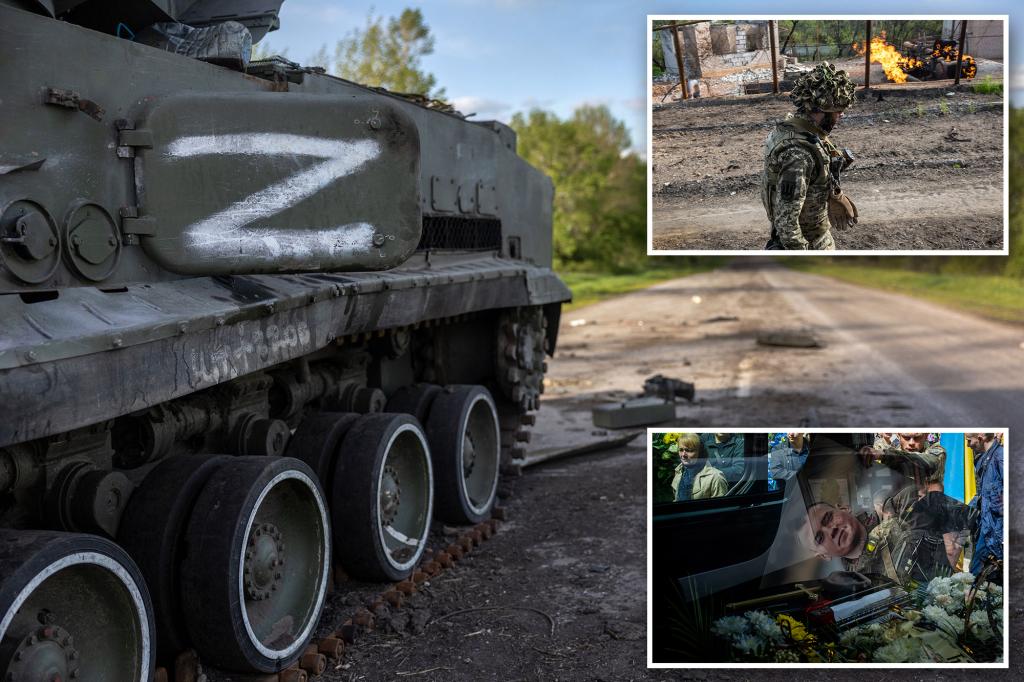 Ukraine “appears to have won the battle of Kharkiv,” a US think tank said.

The Institute for War Research (ISW) announced that the Russian military had withdrawn from its positions around Ukraine’s second-largest city “in view of the Ukrainian counter-offensives and the limited availability of reinforcements”.

Russian units have been unable to hold their own against Ukrainian fighters in the past few days, the ISW said, and have been prevented from encircling the city in northeastern Ukraine.

However, as they retreated, they continued to bombard the eastern province of Donetsk to “decimate Ukrainian forces and destroy fortifications,” Ukraine’s military said on Saturday.

Defense Minister Oleksii Reznikov said the country was “entering a new – long-term – phase of the war”.

The comments came two days after a major Ukrainian victory on the Siverskiy Donets River, an area about 25 miles east of Kharkiv previously controlled by Russia. The battle ended with Russian tanks and other destroyed equipment littering the area around the river.

Ukrainian forces have moved into some of the villages around Kharkiv that have been controlled by Russia since the beginning of the war, CNN reported.

Kharkiv’s mayor told the BBC the Russians had withdrawn from the city and were heading towards the Russian border. Ihor Terekhov said Russian troops never occupied the city but only entered a small part of it once and had not been there for some time.

“The Russians kept shelling Kharkiv because they were very close to the city,” Terekhov said. “Now it is quiet in Kharkiv and people are gradually returning to the city. We supply all citizens with water, gas and electricity. Unfortunately, however, many residential buildings are destroyed or damaged. So in the future we will have to make major changes.”

“There has been no shelling in the city for the past five days. There was only one attempt by Russians to hit the city with a missile near Kharkiv airport, but the missile was eliminated by Ukrainian air defenses,” Terekhov said.

Separately, the head of Ukraine’s military intelligence said the war was going so well that he expected it to reach a tipping point in mid-August and be over by the end of the year.

Major General Kyrylo Budanov told Sky News he was “optimistic” about the progress of the war.

“The breaking point will be in the second half of August,” he said. “Most active combat operations will be completed by the end of this year.”

The same official correctly predicted when the invasion would take place, while others in his government questioned the idea that Russia would start the war.

He now predicts that Ukraine will not only drive Russia out, but will retake both the eastern breakaway regions of Donbass and Crimea, which Russia captured in 2014.

“We know everything about our enemy. We know about their plans almost as they are being made,” Budanov said. “Europe sees Russia as a major threat. You are afraid of his aggression.

“We have been fighting Russia for eight years, and we can say that this much-noticed Russian power is a myth. It’s not as powerful as this one. It’s a horde of people with guns.”

Budanov also said that a coup d’état to oust Vladimir Putin was already underway in Russia and that the Russian leader was seriously ill with cancer.

His bold predictions were countered by Ukrainian President Volodymyr Zelenskyy, who said in his late-night address that “no one can predict how long this war will last.”