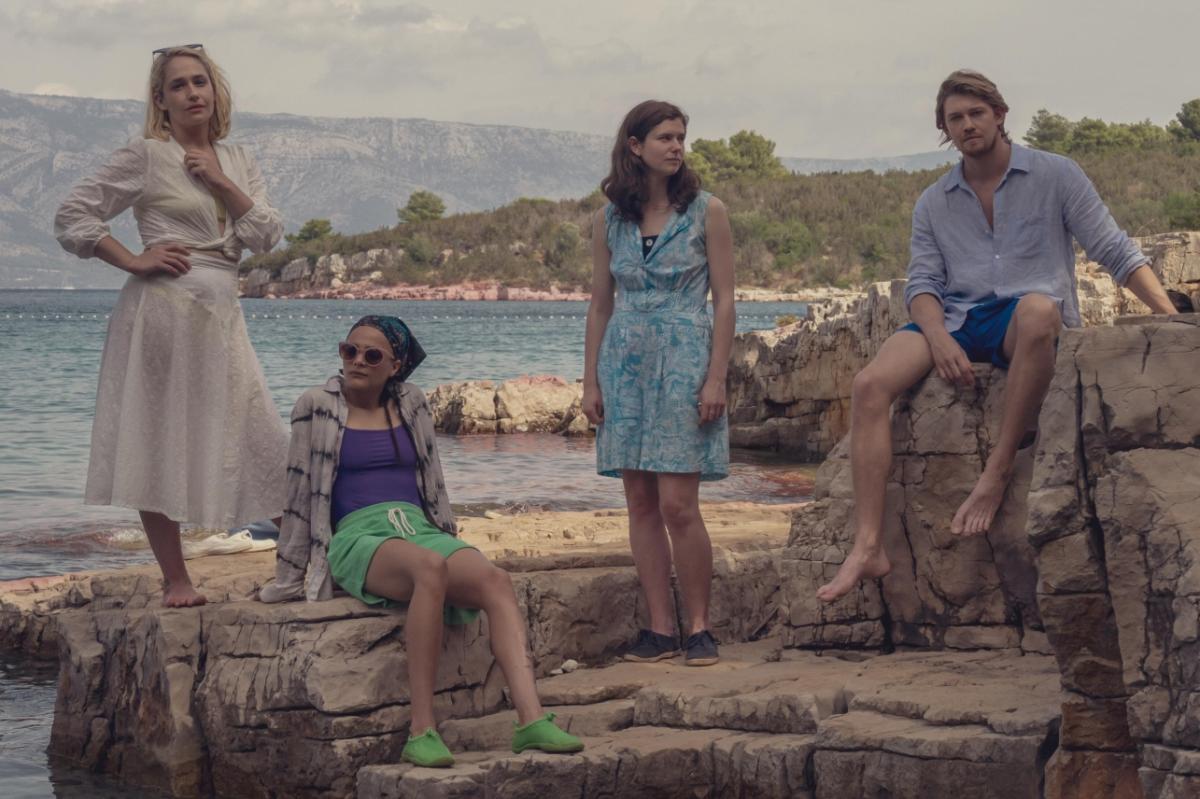 Sometimes producers and streaming networks get a little ambitious when introducing a series project based on a popular novel. They think because it’s a novel that the series adaptation can be six, ten, maybe even twelve episodes. But some novels just don’t translate into long series. An adaptation by Sally Rooney’s conversations with friendsmade by the same production team that adapted her novel normal peoplecould be one of those novels.

opening shot: Two female students are sitting on the stairs looking like they are rehearsing a poem they are reciting.

The essentials: Frances (Alison Oliver) and Bobbi (Sasha Lane) attend Trinity College in Dublin. They are best friends and maintain this friendship even though they ended their romantic relationship three years ago. They read the poems Frances wrote at a local pub.

The school year is over and Frances’ roommate wants to go for the summer, but she spends all her time with Bobbi anyway. After a reading, they recognize Melissa (Jemima Kirke), who has written a book that has garnered some local acclaim. The three get along well and become fast friends; Melissa invites the couple over to her house for dinner with her and her husband, Nick (Joe Alwyn).

During dinner, Bobbi becomes attracted to Melissa and the two openly flirt. There’s certainly an attraction between Frances and Nick, but it’s definitely more halting and uncomfortable. She asks him about the play he’s in, and he seems to downplay the fact that he’s doing it Cat on a hot tin roof because it’s not avant-garde enough. But Frances is interested and asks if she can see a performance.

Sher leaves alone but doesn’t stay to greet him afterwards. For her part, Bobbi, who doesn’t even understand how someone cool like Melissa can be married, let alone a guy like Nick, makes fun of Frances for leaving without her. But she stays in France’s apartment when Frances has severe cramps at night.

Nick promises to come to a reading by Frances and Bobbi, and Frances is genuinely surprised when he shows up.

What shows will it remind you of? conversations with friends has the personal focus and slow pace of normal peopleanother adaptation by Sally Rooney produced by the same group.

Our opinion: conversations with friends seems like the kind of story that would be better suited to a 90-minute film than a 12-episode season. It’s a pretty small story: Best friends who used to be romantically linked become linked to a married couple in different ways. It seems like most of the season will consist of how Frances and Nick will bond, mixed in with some Bobbi and Melissa activities, and what the impact on the original relationships will be.

Does that sound like something you might want to pay attention to (checks screeners) 6 hours? We didn’t think so. It’s not that all four members of this quadrad are unappealing. Oliver plays Frances as someone who seems to have beliefs, but she knows inwardly that those beliefs are mushy at best. Alwyn does a good job giving Nick some squeamishness for being deep and scholarly because no one expects him to be. Lane plays Bobbi like the outspoken New Yorker that she is. And Kirke has been doing the over-it bohemian thing at least since when girl debuted a decade ago.

But the actual story in the first installment didn’t really grab us because it seems that none of the four main characters have much depth, at least not yet. So instead of developing that friendship by introducing ourselves to the lives of the members of the quartet and then letting things grow from there, we dive right into each one who is attracted to someone in the other couple.

Will anything of that depth happen over the course of the season? We really hope so. But even though each episode lasts less than 30 minutes, we don’t know if we have the inner strength to follow this story to the point where it actually achieves something significant.

gender and skin: Nothing in the first episode, although that seems like a temporary thing.

farewell shot: Nick struggles to tell Frances how much he liked her spoken word performance. He suggests writing everything in an email “full of compliments and… full sentences” and Frances says that “we don’t have to make eye contact”. Then she looks up and says, “You could try that though.” We assume she meant eye contact.

Our appeal: SKIP IT. As I said, we would have been very happy conversations with friends whether it would be a movie or maybe even a four part limited series. But there just doesn’t seem to be enough narrative power to sustain the story for 12 episodes.

Joel Keller (@joelkeller) writes about food, entertainment, parenting and technology, but he doesn’t fool himself: He’s a TV junkie. His writing has appeared in The New York Times, Slate, Salon, RollingStone.com, VanityFair.comFast Company and elsewhere.