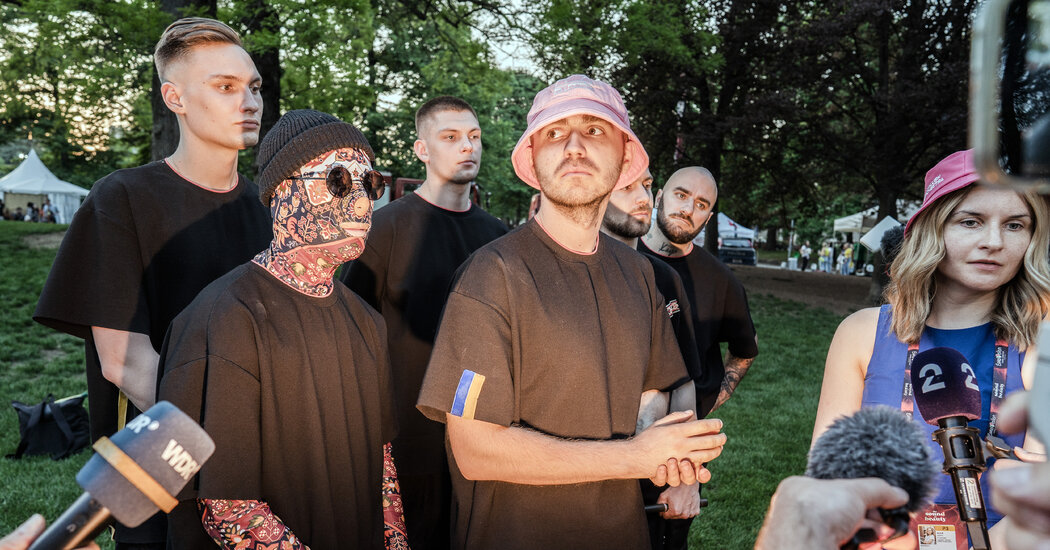 TURIN, Italy – Ukrainian rap and folk band Kalush Orchestra won the Eurovision Song Contest on Saturday as European viewers and juries delivered a symbolic, pop-culture acknowledgment of the solidarity behind Ukraine in its defense against Russian invasion.

After 80 days of fighting that displaced millions from their homes, destroyed cities and towns in eastern Ukraine and killed tens of thousands, the band won an emotional victory for Ukraine with their performance of “Stefania,” a stirring, anthemic song. Written in honor of the mother of the group’s frontman Oleh Psiuk, the song was reinterpreted during the war as a tribute to Ukraine as a motherland.

After performing the song on Saturday night, Psiuk put his hand to his heart and shouted, “I beg of you all, please help Ukraine!” Europe’s voters listened and gave the band 631 votes to victory, well ahead of Sam Ryder Great Britain, who placed second with 466 votes.

Considered a favorite, the Kalush Orchestra traveled under special permission to circumvent a martial law that prevented most Ukrainian men from leaving the country.

The band’s victory over 39 other national acts illustrates how Russia’s invasion of Ukraine unified Europe, unleashed a wave of arms and aid shipments to Ukraine, pushed countries like Sweden and Finland closer to NATO and marginalized the European Union has to shut itself off from her Russian energy.

The war has necessitated other adjustments. The show’s Ukrainian commentator, Timur Miroshnychenko, broadcast from an air-raid shelter. A photo posted by Suspilne, the Ukrainian public broadcaster, showed the veteran presenter at a desk in a bunker-like room surrounded by computers, cables, a camera and eroded walls revealing brick patches underneath. It was unclear in which city he was staying.

The bunker had been prepared to prevent interference from air raid sirens, Mr Miroshnychenko told BBC radio. He said Ukrainians loved competition and “tried to capture every peaceful moment” they could.

Not the entire Kalush Orchestra team was present in Italy; Slavik Hnatenko, who runs the group’s social media, fought in Ukraine. In a recent video interview from Kyiv, Hnatenko said he considered the band’s performance at the Eurovision Song Contest “as important” as his own service in the war.

“It’s a chance to show the world that our spirits are hard to break,” he said, adding that he intends to watch the competition when he’s not in combat and can get a signal on his cellphone.

In an interview in the days leading up to the competition, Psiuk said that even if the Kalush Orchestra won, its members would return to Ukraine. He runs an organization there to provide medicine, transportation and shelter to the people, he said. And he is ready to fight if asked, he said. “We will have no choice,” he added. “We will be in Ukraine.”